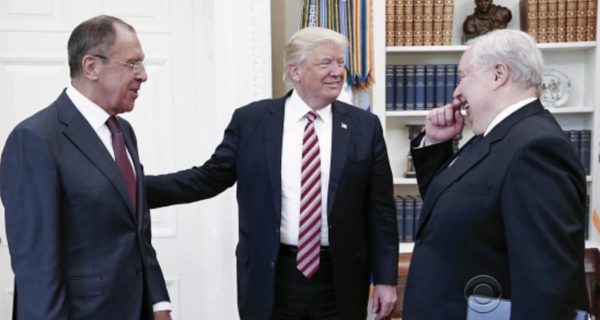 Washington Post story Trump leaked ‘classified information’ to Lavrov is phoney and a further attempt to prevent a meaningful dialogue between the US and Russia.

The Washington Post story about President Trump’s supposed leak of highly classified intelligence information about ISIS to the Russians is a case study of the lengths to which the President’s enemies are prepared to go in order to discredit him and to stop any chance of a rapprochement with Russia.

Briefly, the Washington Post claims that Trump told Russian Foreign Minister Lavrov and the Russians during his recent meeting with them in the Oval Office information about an alleged plot by ISIS to carry out attacks on passenger aircraft using laptops.   The Washington Post describes Trump’s supposed wrongdoing in this way

The existence of an alleged ISIS plot to use laptops to bring down passenger aircraft has been all over the media for months.  That cannot therefore have been the “highly classified information” that President Trump is supposed to have discussed.

It turns out that the “highly classified information” that Trump is supposed to have disclosed is the name of the city where the alleged ISIS plot was discovered.   That supposedly compromised the source of the information, which presumably means the intelligence agency which provided it.

There are a number of obvious problems with this story.

The first is that if any of this is true then the publication of this story in the Washington Post is completely irresponsible and is conceivably a crime itself.

Firstly, the Washington Post grudgingly concedes that Russian Foreign Minister Lavrov hardly reacted to the leaking of the supposedly “highly classified information” Trump is supposed to have leaked to him.

That suggests that Lavrov did not see this information as compromising or sensitive, and was unaware of any greater implications concerning it.  In that case it is possible the Russians failed to notice the supposed importance of this information.

No doubt Russian intelligence is going over the stenographic record of Lavrov’s discussion with Trump made by his interpreters looking for this information even as I write this.  When they find it this is what the Washington Post’s sources say will be the results

The damage would however in that case have been done not by Trump but by the Washington Post and by the anonymous officials and former officials who prompted its article.

The second point is the one about the potentially damaging consequences if the “intelligence partner” who supposedly provided this “highly classified information” were ever to find out about the leak.

The “intelligence partner” – presumably a Middle East country – has now learnt about the leak.  It has done so because the Washington Post has published a story about it.

Whether any dire consequences follow is another matter.  If they do then the blame for that lies not with Donald Trump but with the Washington Post and the anonymous officials and former officials who prompted its article.

Is this story however even true?

The essence of the story – that Trump leaked “highly classified information” to Lavrov and the Russians in a way that does harm or potential harm to US national security – has been emphatically denied by Donald Trump’s highly regarded (perhaps over-regarded) National Security Adviser General H.R. McMaster, as well as by US Secretary of State Rex Tillerson and by other officials

Here is a video of General McMaster commenting on the story.  Here is a transcript of what he said

Firstly, since this is a discussion about classified information there were obvious constraints on what General McMaster could say.  He could not go into the detail of the Washington Post’s story without compounding the damage the Washington Post’s publication of the story has quite possibly already done and without breaking the law.

Secondly, General McMaster has nonetheless unequivocally said that “the story as reported is false”.

Thirdly, General McMaster has made the point that he was physically present in the room when the conversation between Trump and Lavrov took place and that – unlike the ‘anonymous sources’ the Washington Post is relying upon – he is speaking publicly and on the record.

In any sane world statements made publicly and on the record should always be given greater credence than statements made secretly and anonymously.  In any matter involving Trump or Russia the reverse is true.  This story is a case in point.

So what is General McMaster denying?

There is no doubt that President Trump did share with the Russians information about an alleged ISIS plot against passenger aircraft using laptops.   General McMaster says as much, and President Trump has just admitted it.

As President I wanted to share with Russia (at an openly scheduled W.H. meeting) which I have the absolute right to do, facts pertaining….

…to terrorism and airline flight safety. Humanitarian reasons, plus I want Russia to greatly step up their fight against ISIS & terrorism.

And here is what the Washington Post has said about it

If the fact that Trump shared information with the Russians about an ISIS plot against passenger aircraft using laptops is not disputed, and if his right to do so is not disputed either, it is the interpretation of his doing it given by the Washington Post which McMaster, Tillerson and the other senior administration officials are disputing.  That is what McMaster means when he says that “the story as reported is false”.

When world leaders meet they regularly exchange information with each other.  If they did not do so diplomatic contacts would be devoid of all content and would grind to a stop.

In this case Trump told Lavrov of a supposed plot by ISIS to use laptops against passenger aircraft.  Trump says he did this in order to get Russia’s help in the fight against ISIS.  There is nothing unusual or untoward about this, and nothing unusual about Trump telling the Russians some of the details of the plot.  It beggars belief that Trump doing this was in any way sinister or dangerous or a threat to national security or risks any of the consequences the Washington Post alleges.  Had it done so Trump’s aides who were present at the meeting – General McMaster first and foremost – would have intervened immediately to stop him doing it.  That after all is their job.

In other words no harm was done and the President and his officials were doing nothing more than engaging in normal diplomacy.

The Washington Post story itself all but admits this.  As I have said, if Trump sharing information with the Russians really did have the potentially serious national security consequences the Washington Post alleges, then the Washington Post and the ‘anonymous current and former officials’ who were its sources for the story have massively and irresponsibly compounded the damage by telling the world about it.  That they did so in fact shows that no harm was done, and that they know it.

Which brings us to the real point of this story.

Ever since Trump met Lavrov in the Oval Office there has been a concerted attempt by the mainstream media and some US politicians to cast the meeting in the most sinister light.

Firstly there was the preposterous story of the Russian photographer.  Now there is the attempt by the Washington Post to spin a standard diplomatic exchange into a dangerous leak.

Those who give credence to this story or pretend to are either being manipulated or share this agenda.