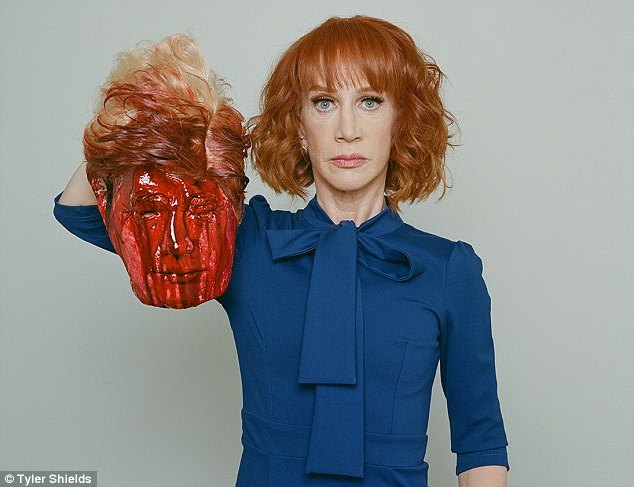 Do you know what’s really going on? – They ( i mean satanists-zionists) so desperately wanted Trump dead that actively using their satanic tricks and techniques to materialize this process. Apparently all of their “decent” ways don’t work anymore ( i mean lying garbage – media and propaganda). Now they dumped out their reserve ( so to say the main and last their chance) to make this thing work for sure.. Monsters!

I hope that Trump is not a sucker and he knows how to resist against these things competently..

Now think about that.. if Trump is really this ‘bad- man’ that the media-garbage say about him why do they want him dead so much.. – just ask yourself this simple question.

I also want to say that all of these artists-clowns just stupid sheep used by satanists for their personal goals. They are willing to sell your soul to devil just to earn a little more dibs.

Griffin joked that she would have to leave the country after the shoot.

Need anymore proof that the liberal left has completely passed the point of hysteria an panic, and have now crossed over into dangerous, fascist territory.

The liberal left in America are quickly moving towards a fascist ideology that punishes any dissenting voices, especially voices that agree with US President Trump or doubt the Hillary induced Russiagate story.

How far will the left go in shutting down and silencing any voices that disagree with atheism, climate change, open borders, shared toilets, and gender fluidity?

Mimicing the liberal left’s love for ISIS and hate for Trump, CNN host and washed up comedian Kathy Griffin decided to add some shock factor to her dying career by beheading President Trump.

Outrage followed from all corners of the political spectrum….from Sarah Palin to Chelsea Clinton.

Griffen immediately apologized, but any amateur can see she is insincere in her delivery. SPOT THE DIFFERENCE: The democrat party versus ISIS. #KathyGriffin pic.twitter.com/9Vjh4OpBRC

#PopQuiz Which terrorist is rep'd by @WME published by @Flatironbooks paid by @cnn @msnbc & on tour sponsored by @LiveNation #kathygriffin pic.twitter.com/CoouzAEuZl

What kind of reaction did she expect?? Do you believe her? https://t.co/d55E1kd1PM

Have you seen this yet? Just SICK. https://t.co/gwzgMEAgWJ

This is vile and wrong. It is never funny to joke about killing a president. https://t.co/zIiuKoMyFw

For the record, I am appalled by the photo shoot Kathy Griffin took part in. It is clearly disgusting and completely inappropriate.

Dear @CNN, I must have missed your statement banning your commentator #KathyGriffin from future shows. Please resend. Thx

– ‘I went too far’: Kathy Griffin apologizes for posting a video of Trump’s ‘severed head’ on social media after Secret Service suggests she will be investigated for threatening the president– Griffin was seen holding up the severed head for photographer Tyler Shields

– ‘This is vile and wrong. It is never funny to joke about killing a president,’ said Chelsea Clinton

– Griffin has since apologized saying ‘I am sorry. I went too far. I was wrong’

– Facing increasing pressure, CNN said they are ‘evaluating’ Griffin’s long-time role hosting its New Year’s Eve coverage but has ‘made no decisions at this point’

Kathy Griffin has apologized for posting a video of President Trump’s severed head after a furious backlash, sparking the Secret Service into an investigation.

The controversial comedian tweeted ‘I am sorry. I went too far. I was wrong’ after Griffin was seen slowly raising Trump’s head during a photoshoot with infamous photographer Tyler Shields.

She also posted a video promising to remove the offending image after she was lambasted by all sides of the political spectrum, including Chelsea Clinton.

But the apology was not enough to stop the army of critics, both Trump supporters and Democrats from attacking Griffin on social media for the outrageous stunt.

Even her long-time New Years Eve co-host Anderson Cooper said he was ‘appalled’ by the photo shoot, which he described as ‘clearly disgusting and completely inappropriate.’

Meanwhile, the Secret Service made an oblique reference to the controversy on Twitter, reminding everyone that any threats against the president are taken seriously.

‘On it! @SecretService has a robust protective intelligence division that monitors open source reporting & social media to evaluate threats. Threats made against @SecretService protectees receive the highest priority of all of our investigations. #ProtectionNeverRests.’

‘We found what she did disgusting and offensive. We are pleased to see she has apologized and asked that the photos be taken down. We are evaluating New Year’s Eve and have made no decisions at this point,’ the spokesman said.

Even former first daughter Chelsea Clinton was quick to express her outrage at Griffin tweeting: ‘This is vile and wrong. It is never funny to joke about killing a president.

Griffin, an outspoken opponent of Trump who is best known for presenting the New Year’s Eve countdown with Anderson Cooper on CNN, is seen holding the head, which is slathered in fake blood.

During footage of the shoot, posted on her own official website Griffin said: ‘Tyler and I are not afraid to make images that make noise.’

That’s certainly what happened when the footage and pictures hit the web.

The shocking images quickly set social media alight, with many calling for her to be locked up for supposedly ‘threatening’ the president.

‘This is discusting [sic] Kathy Griffin has never been funny,’ said self-styled conservative paralegal NativeCA. ‘This should be reported to the FBI & Twitter.’

President Trump’s eldest son Donald Jr. also got in on the act, attacking Griffin for posing with a severed fake head resembling his father, saying it was ‘disgusting but not surprising.

‘This is the left today. They consider this acceptable,’ he tweeted. ‘Imagine a conservative did this to Obama as POTUS?’

‘It’s sad that the left today would rather see America suffer and fail than to see it succeed with @realDonaldTrump at the helm. #maga’

So.. here is another very good video for thought to you