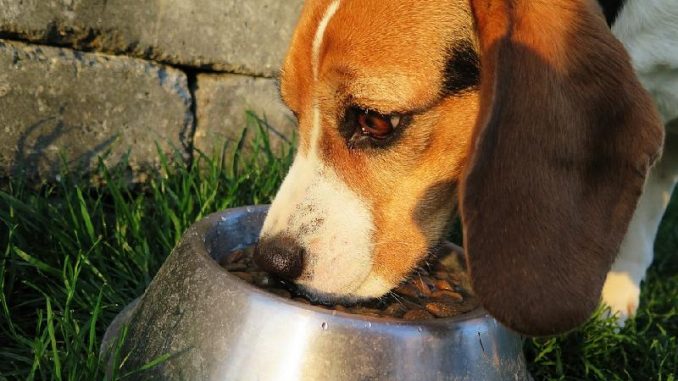 A California-based pet food company has been caught using recycled pets as cheap protein in its popular dog food.

Party Animals is recalling two lots from its line of Cocolicious dog foods after cans in Texas tested positive for pentobarbital — a chemical that’s used by veterinarians to euthanize pets.

In a statement on its website, Party Animal said a customer in Texas had given Cocolicious samples to a lab and the dog food tested positive for pentobarbital.

It’s not the first time a pet food company has been exposed using recycled pets in their product. Back in February Evanger, a pet food company based in Illinois, recalled its dog foods after cans tainted with pentobarbital were making dogs sick.

How did it get in the food?

Pentobarbital is a barbiturate that’s commonly used by veterinarians for euthanasia. So how is it getting in the food?

The pet food industry is almost completely unregulated and in the quest for the cheapest possible protein, companies are using euthanized cats and dogs as ingredients under the “animal byproduct meal” name.

It’s an industry secret that generic “meats” and “meals” can contain euthanized domestic animals. The disturbing fact is commercial pet food companies are feeding dog meat to dogs and cat meat to cats.

If a pet food contains “animal byproduct meal” then pretty much any animal that’s not a bird can be in the food, including animals that were euthanized.

It has became so bad that cats and dogs that regularly eat certain brains of commercial pet food have built a tolerance to the drugs.

Veterinarian Dr Patricia Jordan says: “I was around and saw all the foods that contained pentobarbital 20 years ago. At that time the vet community was unable to sedate animals with serital like they had been previously for short term anesthesia … the reason? The animals were getting the drug in the food and getting resistent to the drug!”

The disturbing trade in domestic dog and cat bodies often begins at the veterinary clinic. After euthanizing old and ill animals, some vets will offer to “take care” of the bodies.

“A friend of mine who worked in an Animal Hospital chastised me when I had to have my dog “put down”; not for having her euthanized, but for leaving the body with the Vet.

“She said they put the euthanized animals in a freezer and sold them to be “recycled” into pet food.

“It seemed strange that the Vet encouraged me to leave her body with them, that “they would take care of her”.

Do you know what your dog is eating?

The next phase of the disturbing trade takes place in rendering plants.

These enormous facilities, operating 24 a day, recycle dead animals, slaughterhouse wastes, and supermarket rejects into various products known as recycled meat, bone meal, and animal fat. These products are sold as a source of protein and other nutrients in the diets of dairy animals, poultry, swine, cattle feed, and domestic cats and dogs.

One estimate states that some 40 billion pounds of slaughterhouse wastes like blood, bone, and viscera, as well as the remains of millions of euthanised cats and dogs passed along by veterinarians and animal shelters, are rendered annually into “animal byproduct meal.”

Because rendering plants operate as cheaply as possible, they unavoidably process toxic wastes.

As well as euthanasia drugs given to pets, flea collars and pet ID tags, surgical pins and needles, cattle ID tags and green plastic bags containing dead pets from veterinarians get churned in the mix that becomes “animal byproduct meal.”

Skyrocketing labor costs are one of the economic factors forcing the corporate flesh-peddlers to cheat.  It is far too costly for plant personnel to take the time to cut off flea collars or take spoiled T-bone steaks out of their plastic packaging.

Since these foods are exclusively used to feed animals, most state agency spot checks test for truth in labeling such as: does the percentage of protein, phosphorous and calcium match the rendering plant’s claims; do the percentages meet state requirements? However, testing for pesticides and other toxins in animal feeds is not done or is done incomplete.

So what can you do?

If you buy processed pet food, read the ingredients on pet food labels carefully and educate yourself about what terms like “animal byproduct meal” actually mean.

If your pet is euthanized by a veterinarian, insist on burying the body yourself. Out of respect for the animal’s life, and out of concern for the health other animals, do not allow the veterinarian to “take care” of the body.