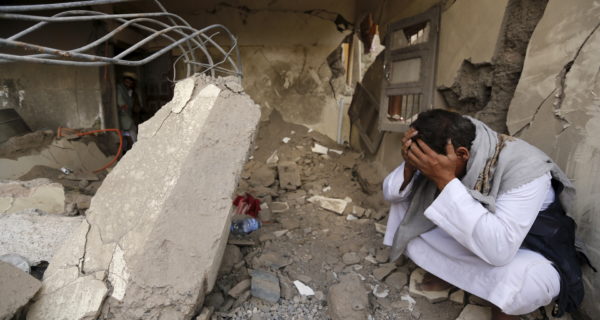 The remark bears no connection with manifest realities on the ground.

Britain’s Defence Secretary Michael Fallon has made an extraordinary claim that Saudi Arabia’s military actions in Yemen which are widely regarded to be war crimes, are acts of self defence.

The claim came as Fallon was questioned about the role of Britain in supplying heavy arms to the Saudi regime.

The war in Yemen is a civil conflict best understood as a four way conflict between Houthi fighters who generally support the rule of Saleh Ali al-Sammad and the ousted government of Abdrabbuh Mansur Hadi. Adding to this mix is a resurgent Southern Movement, which seeks to reconstitute a sovereign state of South Yemen. On top of this are the presence of fighters from al-Qaeda and ISIS, both of which receive covert support from Saudi Arabia.

READ MORE: The Southern Movement and the ambiguities of the civil war in Yemen

Saudi Arabia could have and should have stayed out of the fray, but instead, the Saudi’s have been involved in fighting the Houthi forces who are now in control of Yemen’s capital Sana’a.

Saudi forces operating in Yemen have killed civilians in a war which may turn into a total humanitarian disaster. Yemen’s’ ports are currently blocked, a phenomenon which could lead to a man-made famine.

It seems that Michael Fallon is living in a parallel universe wherein the Saudis are the victims and Yemen is the aggressor.

He then went on to praise Saudi Arabia, a country with one of the worst human rights records in modern history as,

He reaffirmed Saudi Arabia’s right to defend itself, even though Saudi Arabia is the clear aggressor in Yemen.

Fallon is clearly either too stupid to hold a high office of state or he is too wicked to do so. Either way, his remarks are not remotely related to the realities on the ground in Yemen.