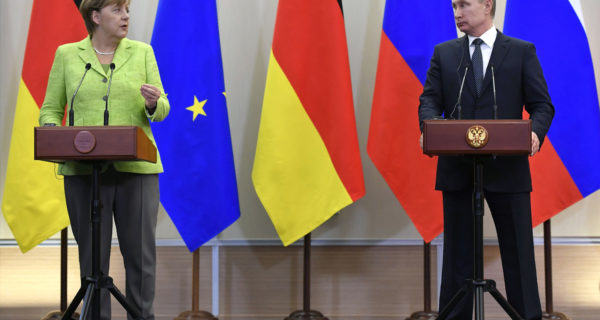 Russian President Vladimir Putin used his press conference with German Chancellor Angela Merkel to make some of his harshest comments for some time about the situation in Ukraine, and to pronounce the Minsk process which is supposed to lead to a Ukrainian peace settlement all but dead.  He also came close to blaming Merkel for its failure.

In doing so President Putin, whilst continuing to give lip-service to the Minsk Agreement, all but admitted that the chance of it ever being implemented has gone

That Putin questions the legitimacy of the present Ukrainian government is unsurprising given what he had to say in the news conference about its origins in what he called an “unconstitutional coup”, which he blamed as the ultimate source of the conflict in eastern Ukraine

Putin also spoke harshly of the actions of the Ukrainian authorities.  Here for example is what he had to say about the 2014 Odessa massacre

However, more relevantly in terms of the current situation in Ukraine, Putin expressly endorsed the recent steps the authorities in the Donetsk and Lugansk People’s Republics have been taking, whose effect is to separate these republics increasingly from Kiev.  Moreover Putin explicitly blamed this on the actions of the Ukrainian authorities, whilst implicitly blaming the Western powers – first and foremost Angela Merkel herself, who was standing just next to him – for allowing this to happen

The message to Merkel in the last two paragraphs of these comments – that the failure of the Minsk process is largely down to her – is clear enough, even though with Merkel standing right beside him Putin was careful to veil his comments.

The veil was however the very thinnest one, and it seems from Merkel’s much more defensive comments during the press conference that in their private talks Putin expressed himself with utter clarity.

Western commentary about the meeting between Putin and Merkel has tended to emphasise the strength of the message Merkel supposedly gave Putin.  On the contrary it was Putin’s message to Merkel which was the strong one, and this was clearly so not just during their private meeting with each other but during their joint news conference.

As for the future, though the Russians are still going through the motions of working within the framework of the Minsk Agreement and of the Normandy Four format, in reality they have given up on them both, and understand that the Donetsk and Lugansk People’s Republics have to all intents and purposes seceded from Ukraine, and are not going back.

Putin also clearly signalled that he no longer believes that a political settlement of the Ukrainian conflict in any form is possible whilst the present Maidan based regime remains in power.

As for the issue of the sanctions upon which Merkel seems to have rested so many hopes, Putin throughout the whole press conference never mentioned them once.