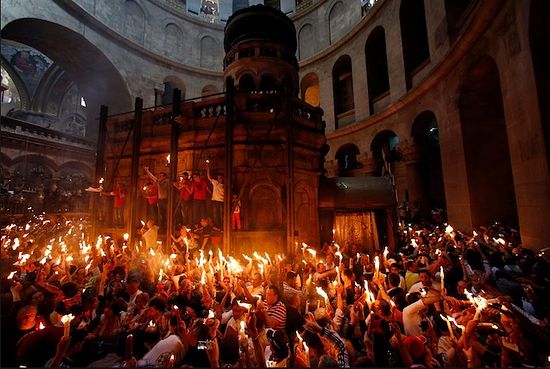 The Holy Fire, which descends every year on the eve of the Orthodox feast of Pascha in Jerusalem, will be delivered to the various corners of the Earth, with the support of the Russian St. Andrew the First-Called Foundation, including, for the first time this year, to the United States of America.

“It is planned to deliver this sacred blessing for the first time to the US, and we’ve already received permission to transport the lampadas with the Holy Fire on board a plane,” the foundation’s press service reported to Interfax-Religion today. The Holy Fire is being brought to the US by the initiative of parishioners of the Russian Orthodox Church Outside of Russia.

According to the site of the Russian Orthodox Church Outside of Russia, the Holy Fire will be ceremoniously greeted at 12:05 pm on Pascha Sunday at JFK Airport. From there it will be delivered to the Church of the Mother of God “Inexhaustible Cup” in Brighton Beach for Agape Vespers, where it will be distributed to the faithful.

At 3:00 PM the Holy Fire will be taken to St. Seraphim Memorial Church in Sea Cliff, NY for Agape Vespers and at 5:00 pm to the Synodal Cathedral of Our Lady “of the Sign” in New York City, where it will be ceremoniously greeted by His Eminence Metropolitan Hilarion and the cathedral clergy before the celebration of the hierarchal Agape Vespers.

The Holy Fire will be available to parish rectors all of Bright Week. Advance notification is requested.

Since 2003 the Holy Fire has then been taken to various countries as part of the St. Andrew’s Foundation’s “Pray for Peace for Jerusalem” program, in which Orthodox believers from Russia, Israel, Serbia, Romania, Poland, the Czech Republic, the USA, and other nations have joined the foundation’s delegates and the patriarch of Jerusalem to pray for peace in the Holy City.

The Holy Fire is traditionally brought to the Paschal service at Christ the Savior Cathedral in Moscow and from there throughout Russia. In 2016, the fire was taken to 53 Russian and 11 international cities.

As previously reported, the Holy Fire will also be delivered to London for the first time.