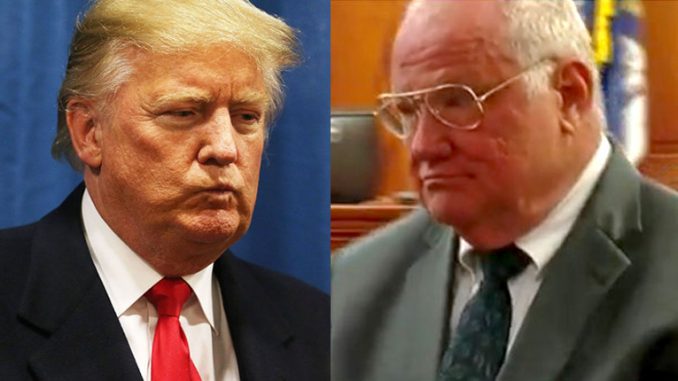 Defiant President Trump has had a member of his own campaign team thrown in jail for belonging to the elite pedophile ring that has infiltrated politics nationwide.

Tim Nolan, the former chair of the Trump campaign for Campbell County, Kentucky, has been arrested and charged with “felony human trafficking of a minor, felony inducing a minor to engage in sex, and a third count of giving alcohol to a minor,” according to the indictment filed in Boone County, KY.

The alleged crimes were committed in 2016, while he was chair of the Campbell County arm of the Trump campaign.

But Trump has declared that children are more important than partisan politics, and insisted Nolan be thrown in jail and prosecuted to the full extent of the law.

Trump knows pedophiles politicians value their filth over party politics. The enjoyment of murdering and raping children completely overrides any political differences they have.

At the end of the day, a pedophile politician is a compromised being working for the global elite – not a functioning member of the Republican Party.

Nolan is a former county district judge and current member of the Board of Education for Campbell County.

But connections and friends in high places count for nothing with President Trump when it comes to draining the swamp of pedophiles.

No matter which side of the aisle you are from, you are going down.

Weeks after former mayor of Hubbard, Ohio (D) Richard Keenan admitted in court to raping a young child, the current Democrat mayor of Seattle is now being dragged to court on pedophile charges as President Trump’s federal investigation into the elite pedophile ring begins taking down high-profile perpetrators.

Federal authorities have locked up more than 3,500 people on child trafficking and pedophilia charges since President Trump assumed office, however the huge increase in numbers on recent years is being completely ignored by mainstream media.

According to the FBI there were less than 400 sex trafficking-related arrests made in the entirety of 2014, proving that President Trump is serious about using “the “full force and weight” of the U.S. government to break up child sex trafficking rings and lock up sexual predators.

“This should be one of the biggest stories in the national news. Instead, the mainstream media has barely, if at all, covered any of these mass pedophile arrests. This begs the question – why?” Liz Crokin wrote for Townhall.com.

In a press conference from the White House on Feb. 23, Trump addressed how human trafficking is a “dire problem” domestically and internationally and set his sights on the elite pedophile ring that has established itself in Washington D.C., spreading a toxic agenda and destabilizing our democracy.

By taking down elected officials, judges, and senior law enforcement officers, Trump is proving he is serious about protecting children from the elite pedophile ring and he is delivering on his promises.