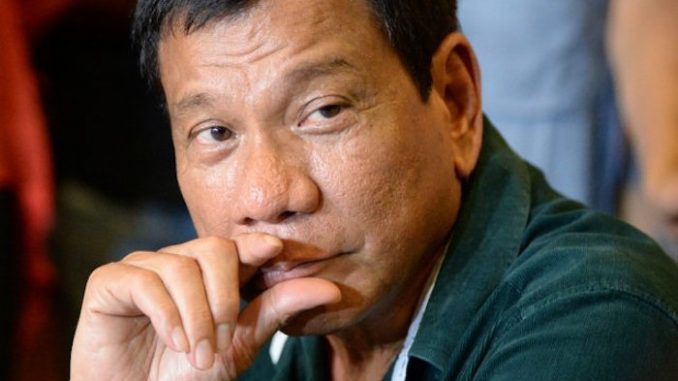 President Duterte has vowed to “eradicate all traces of Rothschild financial criminality” from the Philippines, announcing that he will no longer respond to pressure or financial blackmail from the US government or Rothschild-controlled global banking institutions.

The president, who claims to have killed cartel bosses with his own hands, is not one to be bullied, and he has now set his sights on cleaning up the financial corruption in his country, promising to “drive them out like the scavengers they are.“

Before Rodrigo Duterte assumed the office of president, the Philippines was suffering from the effects of IMF/World Bank-imposed austerity and privatization that exploited its people and resources. It was also one of Asia’s most corrupt and troubled nations.

Though the Filipino people, through strong showings of popular resistance over a period of years, were able to curb some of the most rampant crony corruption, many of the shackles imposed by these Rothschild-controlled institutions remained.

President Duterte rode into power campaigning on a ticket of major change, but unlike Western politicians who pay lip service to change before letting down their supporters, the Philippines president has delivered on his promises – in spades.

During the election campaign Duterte urged the people to kill him if he failed to resolve crime and corruption in the country during the first six months of his term.

Over one year into his term and he has delivered on his promises. He’s now famous for more than calling President Obama a “son of a whore” at a regional summit in Laos last year. Much to the Rothschild-controlled international community’s outrage, Duterte is shooting from the hip, and cleaning up his country.

In 2016, after warning those involved in the narcotics trade that “it’s either you kill me or I kill you“, an astonishing 1,007,153 narcotics criminals surrended to government, and 73 government officials were arrested for involvement in the illegal drug trade.

Billions of dollars worth of narcotics were seized, showing what can be done in a short timeframe if the problem is tackled seriously.

Now the president is going after tax-dodging oligarchs and multination corporations who haven’t paid a cent for decades. The elites and their media empires held former regimes to ransom. But they have no power over Duterte. And they are actually paying up.

How does Duterte get away with taking on the rich and powerful? It’s simple. He boasts a massive 83% popular approval rating across the country. The oligarchs cannot use the mainstream media to destroy him because the people don’t trust what the media says anymore.

The people trust Duterte because unlike generations of politicians who came before him, he actually does what he says. His plain speaking enrages the powers that be in the West, who have waged war against him through their propaganda channels in the media.

But whose judgement should we trust – the global cabal, or his own people?

When he says he will “eradicate all traces of Rothschild financial criminality” from his country, there is no question he will follow through, despite the inherent risks.

The International Monetary Fund (IMF) and US-dominated World Bank have been major players in the global economic landscape ever since their creation in 1944.

These international banking organizations, which are privately controlled by the notorious Rothschild banking family, first pressure nations to deregulate their financial sector, allowing private banks to loot their economies.

Once the governments are forced to bail-out their deregulated financial sector, the IMF or World Bank sets up a loan package written in secret by central bankers and finance ministers that undermine their national sovereignty and force them to adopt policies of austerity that harm workers, families, and the environment.

The Philippines have become the first Asian country to grow wise to the ruse. They have worked hard to gain financial independence and are now in the process of kicking the Rothschild controlled banks out of their country.

The Philippines transformation under Duterte proves that any nation, no matter how impoverished and troubled, can throw off the shackles imposed by international bankers and trade in death and destruction and return the power to the people.