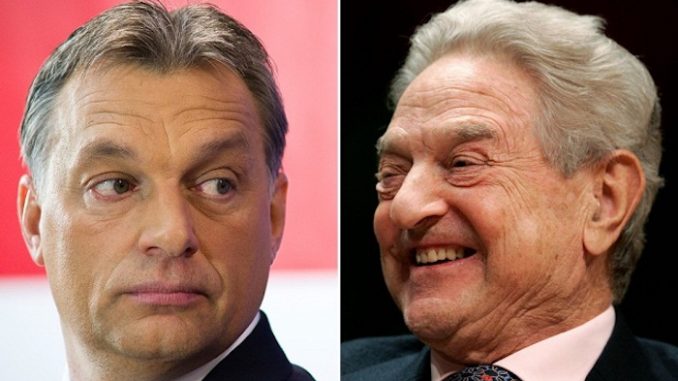 “I know that the power, size and weight of Hungary is much smaller than that of the financial speculator, George Soros, who is now attacking Hungary,” Orbán said.

“Despite ruining the lives of millions of European with his financial speculations, being penalized in Hungary for speculations, and who is an openly admitted enemy of the euro, he is so highly praised that he is received by the EU’s top leaders,” he said.

Hungary isn’t the first country to run George Soros out of town. Macedonia has launched ‘Stop Operation Soros’ (SOS) in an effort to rid the nation of his insidious influence, and Russia has declared Soros a wanted man in their country, citing him and his organizations as a “threat to Russian national security”.

Congress also announced a “full investigation” of his affairs in March, starting with his attempt to install leftist regimes in Eastern Europe with the help of U.S. taxpayer’s money.

Soros is running out of safe harbors. He gambled on a Clinton win – and lost. He bet billions on the world turning left – and globalist – but the people of the world rejected his vision. Now his shady funding of radical leftists around the world is finally catching up with him.

The Hungarian Prime Minister’s powerful speech built upon comments he made in an Easter interview with Magyar Idők, in which he explained the reasons behind Hungary’s attitude toward George Soros.

“There can be no special privileges, and no one may stand above the law – not even George Soros’s people,” he said.

Through his organisations in Hungary, and hidden from public view, Orbán said that “George Soros is spending endless amounts of money to support illegal immigration.”

“To pursue his interests he pays a number of lobbying organisations operating in the guise of civil society. He maintains a regular network, with its own promoters, its own media, hundreds of people, and its own university.”

“I believe that George Soros must not be underestimated: he is a powerful billionaire of enormous determination who, when it comes to his interests, respects neither God nor man,” he said.

There is no doubt George Soros does not respect God. After all, the mad billionaire is on record claiming he is a god and “the creator of everything.”

Soros’s attempts to use illegal immigration, death, and destruction to shape the world in his own image must be stopped.