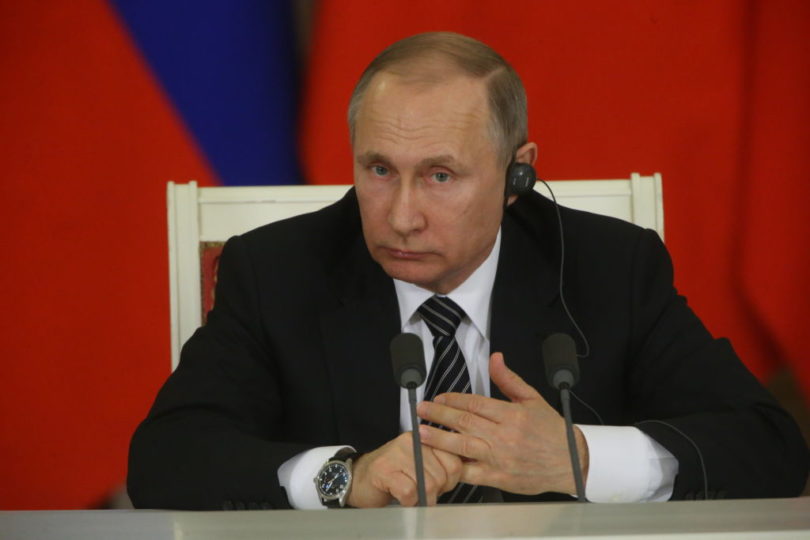 Leave it to the Kremlin to try setting the record straight after a U.S. media frenzy spinning any contacts between the Trump campaign and the Russian government as evidence of election sabotage.

Russian President Vladimir Putin’s spokesman led off an interview this weekend with the unsurprising revelation that the Russian ambassador also met “with people working in think tanks advising Hillary or advising people working for Hillary,” as reported by The Hill.

“Well, if you look at some people connected with Hillary Clinton during her campaign, you would probably see that he [sic] had lots of meetings of that kind,” Dmitry Peskov said. ”There are lots of specialists in politology, people working in think tanks advising Hillary or advising people working for Hillary.”

The Russians should never be taken at their word; but who, exactly, could these Kremlin officials be talking about? One possible lead is campaign manager John Podesta. Podesta has had extensive Russian contacts. Based on WSJ investigative reporting and GAI reports: Gawker went on to explain that Blumenthal passed on the advice of foreign agent John Kornblum “without comment.” Kornblum at that time was working on behalf of Georgian Dream, an opposition party that supported closer ties to Russia.

As the New York Times pointed out in March of this year:

It should be noted that the U.S. media recently made hay of former National Security Adviser Michael Flynn working as a lobbyist and as an agent on behalf of the Turkish government. What of a Clinton adviser apparently working on behalf of a Pro-Russian party?

Dmitry Peskov, in his interview, also attempted to clarify if, and to what extent, the Kremlin preferred Donald Trump over Hillary Clinton as President of the United States. “You would probably recall that President Putin, during the election campaign, had never answered directly a question about his candidate of his support. He kept saying that we will respect a choice of American people,” Peskov said.

“If you ask him whether he had mentioned the then-candidate Donald Trump,” Peskov clarified. “I will answer, yes, he had.”

Then, Peskov pivoted to put Putin’s preference for Trump as president into perspective.

“The candidate Hillary Clinton was quite negative about our country in her attitude and in her program, declaring Russia being nearly the main evil in the world and the main threat for the United States,” Peskov said.

“And to the contrary, the other candidate, Donald Trump, was saying that, ‘Yes, we disagree with the Russians … in lots of issues, but we have to talk to them in order to try to find some understanding.’ Whom would you like better? The one who says that Russia is evil or the one who says that, ‘Yes, we disagree, but let’s talk to understand and to try to find some points of agreement?’” Peskov asked. The Kremlin’s claim is an important one. After the conversation between former National Security Adviser Michael Flynn and Russian ambassador Sergey Kislyak during the election leaked and led to Flynn’s resignation (due to Flynn’s lack of forthrightness with the rest of the Trump administration, not because there was anything illegal proven to have been said), one could say the media sees ‘blood in the water.’

Subsequent questions about Attorney General Jeff Sessions failing to disclose two meetings with Kislyak — one in public and one with two senior U.S. officials — has further stoked the flames of media inquiry into Trump administration and Russian connections.

After much protest about Trump campaign officials meeting with Russian Ambassador Sergey Kislyak, it turns out that the ambassador was quite busy, having met often with U.S. officials and politicians from both parties.

Kislyak met with U.S. officials at The White House 22 times. Kislyak sat near Democratic congressmen during President Trump’s address to joint session of Congress. Kislyak met with Democratic Senator Claire McCaskill, who lied about it, but was then busted when pictures came out (though the New York Times didn’t call her on it). Kislyak met with current Democratic Minority Leader Nancy Pelosi, though she, too, lied about it. After she was nailed dead to rights, Pelosi’s spokesman claimed that Sessions met with Kislyak privately. This, too, was proven to be a lie. It should be noted that Hillary Clinton presided over a failed “reset” with Russia during her tenure as Secretary of State.

It’s March, 2017, five months out from an election, and the press is still re-litigating its case that Hillary Clinton was ‘robbed’ of the November election victory. It’s ironic that the U.S. media is still furthering the one known agenda of the Kremlin: undermining the legitimacy of the duly elected President of the United States and the American people’s confidence in their elections.