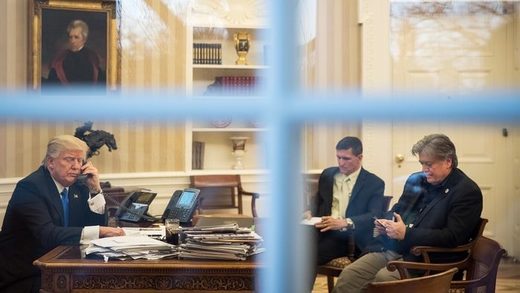 A while ago Matt Tabbi in Rolling Stone warned: Why the Russia Story Is a Minefield for Democrats and the Media:

Sanity is finally winning over. After raising all kinds of shambolic rumors about “Russian interference” the “western” intelligence agencies are walking back their previous outrageous claims:

There is no evidence for any Russian interference in the U.S., or any other, election. No evidence has been show, despite many claims, that Russia or its proxies hacked John Podesta’s emails or the DNC or collaborated with Wikileaks.
Even the Democrats now concede that the whole mountain of bullshit their anti-Trump and anti-Russian campaign created stinks to high heaven:

[S]ome Democrats on the Intelligence Committee now quietly admit, after several briefings and preliminary inquiries, they don’t expect to find evidence of active, informed collusion between the Trump campaign and known Russian intelligence operatives, though investigators have only just begun reviewing raw intelligence. Among the Intelligence Committee’s rank and file, there’s a tangible frustration over what one official called “wildly inflated” expectations surrounding the panel’s fledgling investigation.

Ardent Russia critics like Masha Geesen and former ambassador Michael McFaul now warn of irreparable damage the irrational anti-Russian campaign may cause. A New York Times opinion piece points out that the reignited anti-Russian attitude goes back to the 19th century and was as wrong then as it is now. Claims that meetings between the incoming Trump administration and the Russian ambassador were nefarious are hard to hold up when members of the Clinton campaign also met him. Trump’s National Security Advisor Flynn was accused of colluding with Russia when in fact he was paid by Turkey to lobby for Erdogan.

The disinformation campaign against Russia is falling apart for lack of any evidence. The media who ardently supported it have lost trust. As they obviously lied about Russia how much truth are they telling on other issue?

Tabbi’s warning was late. The damage is done. “Western” relations with Russia have been hurt. But also hurt are the reputations of the media and of the Democratic party. Trump though has been justified with his rejection of that campaign. He now is, as Tabbi predicted, “pre-inoculated” against other accusations – at least with his followers and those sitting on the fence. Trump has now the space to develop his original grand strategic idea of seeking amiable relations with Russia before getting embroiled in any other international dispute. Those relations are now developing on the ground in Syria where cooperation between Russian and U.S. troops intensifies:

Signs are that there is way more of that then the Pentagon admits. There have been several meetings at the highest levels of Russian and U.S. military and whoever commands U.S. forces in Syria will surely have a direct line to the Russian ground commander to coordinate their moves.

The Democrats failed in their anti-Trump, anti-Russia campaign.