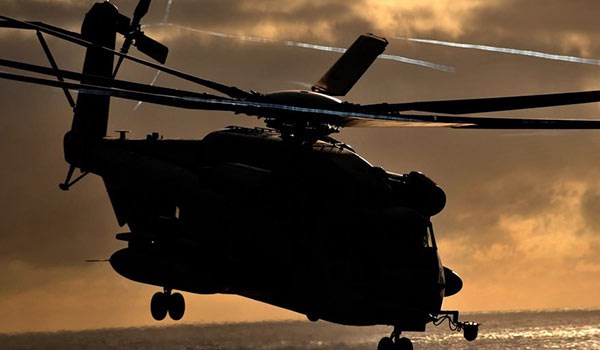 TEHRAN (FNA)- Arab media outlets said that the US troops have carried out another heliborne operation to evacuate 10 more ISIL commanders from the Eastern province of Deir Ezzur.

The Arabic language al-Hadath news website reported that several US military helicopters landed on kilometer 10 of Deir Ezzur-Hasaka road and evacuated a number of ISIL commanders from the region.

“After the helicopter landed, several US marines took 10 ISIL commanders on board and left the region,” the report said.

“Abu Dajane Fransawi has most likely been among the top ISIL commanders taken away by the US marines,” it added.

Local sources disclosed in January that the US-led coalition’s helicopters carried out an unprecedented heliborne operation in areas West of Deir Ezzur city to relocate ISIL’s foreign fighters from the region.

The sources said that 6 helicopters were present in the operations, including two that carried a number of soldiers and Arabic translators in a region near al-Kebr station.

The source said the US troops left the helicopters and staged a raid on the terrorists at a water pump station, killing a number of them. “Then they took several ISIL terrorists captive, in an action that more seemed like a theatrical move”.

“It looked like a drill and our suspicions grew when we came to realize that they only took captive those ISIL members who were foreigners,” he added.

Other sources said that “the coalition forces that could speak Arabic with the accent of the Persian Gulf states took with them some of the non-Syrian members of the ISIL”.