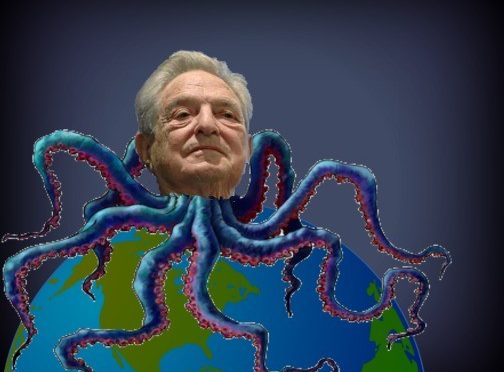 The simultaneous George Soros funded protests occurring yesterday in both Russia and Belarus were meant to coincide with one of the largest NATO war exercises in history, and are but another example of the United States “prelude to war” subversive actions against the Federation.

According to this report, George Soros is an American-Hungarian billionaire who revealed how he became wealthy during a 1998 interview with US reporter Steve Croft when he gleefully admitted that 1944, at the height of World War II, was the happiest year of his life, and was when he made his fortune confiscating the property of Jews sent by the Nazis to concentration camps to be slaughtered—and in the early 1990’s when being interviewed by a British reporter, declared he controlled America and said about himself: “I imagine myself to be God … I carried some powerful messianic fantasies that I felt I had to control them, otherwise they could lead me to trouble…it’s a kind of disease when you consider yourself God, the creator of everything, but I feel comfortable from the fact that I began to live this way.” (ENGLISH) George Soros, the controller of America and the world’s newest “god”

With two branches of George Soros’ charity network—the Open Society Foundations (OSF) and the Open Society Institute (OSI)—being banned in 2015 by Russia as being threats to the Federations national security, this report continues, this Nazi-aligned “god” has been immune to criticism in the West due to his vast media holdings and leftist organization structure that permeates nearly every single facet of life in America today and led to him being called Hillary Clinton’s “puppetmaster”. To what the new Nazi “god” George Soros seeks to achieve, this report explains, is nothing less than the complete and total destruction of Russia whose turning away from globalist communist ideology towards nationalistic Christianity has alarmed the Western elites—and whose Christian Cross wearing leader, President Putin, has created what is being called the “Miracle of Russia” that these Western elites fear is going to emulated by President Donald Trump.

In order to destroy Russia, this report details, George Soros has financed and instigated a series of what are called “Colour Revolutions”—and whose next targets, beside Russia, include Southeast Asia and the United States. Of his latest “Colour Revolution” successes, this report continues, the George Soros led and financed “Orange Revolution” in Ukraine has been the most destabilizing to the world—and that from its beginning in 2004, led to, a decade later in 2014, the overthrow of this nations legitimately elected government in what is now called “the most blatant coup in history”. To his greatest failure, though, this report notes, the George Soros led and financed 2011 “White Revolution” in Russia met with complete failure—most importantly due to the fact that its devout Christian leader, President Putin, remains the most popular leader in the nation, in fact, in the whole world. With “Russia hysteria” blaring daily from the headlines of nearly all of the West’s newspapers and television broadcasts, this report says, George Soros, yesterday, attempted to launch another “Colour Revolution” against Russia—this time labeling it the “Green Revolution”, and that began with Soros acolyte Alexei Navalny took a page from Hillary Clinton mentor Saul Alinsky’s playbook “Rules for Radicals” and photoshoped with green paint the “Motherland Statue” in Volgograd (a revered statue among Russians where the biggest battle in World War II took place) insulting 99.9% of Russia in the process—but whose “act of bravery” received major press coverage among the leftist US Media. Alexei Navalny, this report explains, is a relatively minor Russian political figure who as a member, in 2013, of the People’s Freedom Party ran and lost the election to be the Mayor of Moscow in which he received barely 27% of the vote, and that upon this defeat, in early 2014, he founded the Progress Party—but that in 2015 was declared to be illegal.

Important to note about Alexei Navalny, this report continues, was that in 2014 he was, also, convicted, along with his brother, of stealing around $500,000 from two firms, including an affiliate of the French cosmetics company Yves Rocher, between 2008 and 2012—and that he received a suspended sentence for, with his brother Oleg, however, receiving a prison sentence of 3 ½ years. Following his conviction, this report details, Alexei Navalny “fell into the tentacles” of George Soros through his American protégé Andrew Paulson (known as “The Blogging Czar Of Moscow”) and Russian oligarch billionaire Alexander Mamut (all three of whom are London neighbors)—who provided to Alexei Navalny a LiveJournal blogging platform owned by their company SUP Media.

And using his LiveJournal blogging platform yesterday, this report states, Alexei Navalny used his defacing of the “Motherland Statue” to instigate an illegal protest in Moscow sending his protest followers to unauthorized areas that he had not been permitted for—and leading the government to state:

“The Kremlin respects the civil position of the people and their right to express this position… But we cannot respect those who deliberately misguide people, those who did it yesterday and the day before yesterday, provoking them into illegal activities.  We cannot respect those who deliberately misguided minors, children in fact, by agitating them, promising certain rewards for taking part in an unsanctioned event, exposing them to harm.” Like all major capital cities in the world, this report explains, Moscow, with its nearly 12 million citizens inhabiting it, fully respects the rights of its people to hold peaceful demonstrations—but that the organizers of, like Alexei Navalny, must first obtain permits so advanced preparations can be made by police authorities in order to minimize traffic disruptions for life saving emergency equipment and personal in the case of medical needs and/or fires.

With Alexei Navalny having obtained his lawful protest permits, however, this report says, he, instead, illegally launched 7,000-8,000 of his protestors into central Moscow—and for which he received a 15-day jail sentence for doing, along with a $350 fine. As to the true purpose of these George Soros funded protests in Moscow, Belarus and other Russian cities instigated by Alexei Navalny, this report further states, was the West further feeding its “Russian hysteria” media propaganda machine—and that Foreign Minister Sergey Lavrov lashed out against by his stating:

“I proceed from the stance that each country has laws, based among other things on the universal criteria, and in this particular case on the criteria, stipulated by the international pact on civil and political rights – envisaging freedom of speech and the right for gatherings as well as exceptions when it concerns the state security and the moral well-being of society.

Before this pact was recognized, one of the prominent figures said that the freedom is to abide by laws.  Therefore, the laws, which are stipulated in the universal international legal tool of sovereign states to impose restrictions on events that may result in mass unrests, are the basis of this freedom we are talking about.

When events of the same level provoke different reaction all we can think of in this regard is infamous double standard.

I cannot remember when somebody expressed a strong and public reaction regarding the decisions, recently made in Austria, Holland, Germany, where the authorities banned holding certain protests, it did not concern anyone and nobody said anything about it.”

With the United States being so fearful of mass protests that they’ve established what are called “Free Speech Zones” more resembling prison yards, Germany frequently making mass arrests of protesters, and a German Court upholding the government’s right to ban demonstrations completely, Austria frequently battling against their protestors, and Holland, during last weeks “Battle of Rotterdam”, using water cannons, horse charges and batons to subdue their protesters, this report concludes, the Western propaganda medias deriding Russia for stopping illegal protests endangering the welfare of its citizens cannot be simply viewed as “normal hypocrisy”—but, instead, needs to be viewed for what it truly is—“a prelude to war”. Police in Holland beating protester during “Battle of Rotterdam”