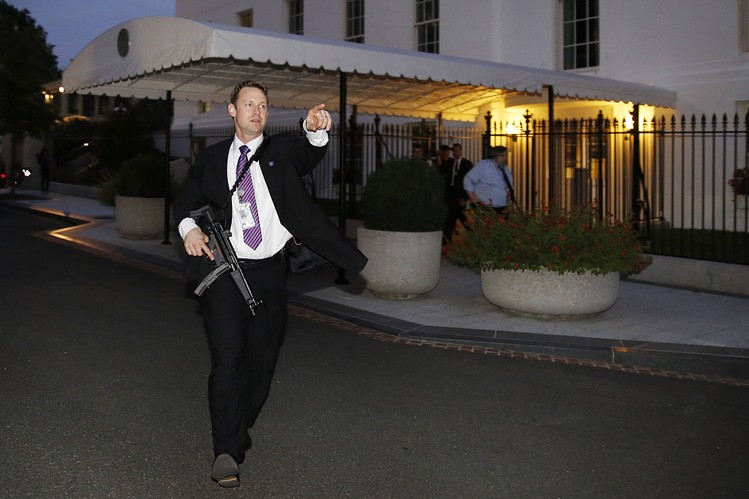 News reports from the United States over the weekend saying that an “intruder” had scaled at least two fences at the White House, where President Donald Trump was in residence, are completely untrue – and that, in fact, this “intruder” has been linked by the SVR to a mysterious American spy having connections to both the Central Intelligence Agency (CIA) and Germany’s Federal Intelligence Service (BND).

According to this report, the White House is considered to be an impenetrable fortress whose Secret Service (SS) protectors call it “Olympus”, because like the mythical mountaintop throne of Zeus, no one gains access to it without an invitation—and whose astounding security measures include:

“Just inside the fence, alarms placed below ground and infrared sensors above the ground detect fence jumpers.  Hidden around the perimeter of the lawns and gardens are teams of armed Secret Service agents carrying semiautomatic pistols, shotguns and machine guns.  Snipers who can accurately hit targets as far away as 1,000 yards (914 meters) dot the White House roof.  An entire SWAT team takes to the roof whenever the president enters or leaves the building.” With literally every inch of the White House and its grounds monitored by motion and infrared sensors from one of the most secure places on Earth able to take a direct hit from an atomic bomb, and refered to as the Underground White House, this report continues, the American mainstream propaganda media this weekend preposterously reported that at about 11:38pm Friday night, a lone “intruder” named Jonathan Tuan Tran was able to scale at least two fences, penetrate up to 200 yards from where he entered the grounds, while avoiding the most sophisticated motion and heat sensors ever developed, evade highly trained and heavily armed Secret Service SWAT teams, and who, also, was able to make his way to the very entrance of President Trump’s living quarters before his “bumping into” a lone uniformed Secret Service guard who took him into custody. Important to note about Jonathan Tuan Tran, SVR analysts in this report write, was that he was employed as a Product Engineer at the Germany company known as International Rectifier (INFINEON)—whom Russian intelligence has long refered to as the “Mark of Beast” company for its efforts to have the entire population of the European Union “micro-chipped” with national ID numbers—and who, also, provides electronic access systems to various US government intelligence agencies—including the CIA and Secret Service.

Most critical, however, to note about Jonathan Tuan Tran, this report says, was his working for the San José State University Research Foundation between April 2011-December 2011—and who were major contributors to the CIA’s “New Psychic Frontiers” document about the US falling behind the Soviets in “mind ability” research released (except for major redactions) from classified top secret status on 10 September 2003. During his time working for the San José State University Research Foundation, this report continues, Jonathan Tuan Tran also did work the US Environmental Protection Agency (EPA)—and that the SVR states made him one of the hundreds of “recruits” brought into the American intelligence community through the EPA by the mysterious (and believed to be double agent) spy John Beale.

John Beale, this report explains, is believed by the SVR to have been recruited into Germany’s Federal Intelligence Service (BND) while he was stationed in Germany in the 1970’s with the US Army—and who in returning to the United States gained employment at the EPA becoming that US government agencies top paid employee—but whose earnings were said to be supplemented by the CIA whom he performed many secret recruiting missions for. In 2013, this report details, German Chancellor Angela Merkel “discovered” that her phone had been ordered tapped by President Barack Obama—and that SVR intelligence analysts state was confirmed as being true by information relayed to the BND by John Beale.

Within a week of Chancellor Merkel discovering that her phone had been tapped by President Obama, this report continues, John Beale was arrested by the Obama regime and charged with lying about his working for the CIA—and that he was sentenced to prison for with his being released this past year. As to exactly what this White House “intruder charade” was really all about, and that former Secret Service agent Jonathan Wackrow warned “had the potential to be catastrophic”, this report notes, remains “unknown/uncertain” to SVR intelligence analysts—especially with US mainstream propaganda media reports making up such outlandish lies such as Tran’s family was called by the Secret Service after his arrest—when, in fact, US federal agents would have swarmed every inch of his families home with no warning whatsoever so no evidence could be destroyed. In a speculative analysis, though, of this White House “intruder charade”, this report concludes, all of the available facts and evidence show that Jonathan Tuan Tran was able to gain access to the White House grounds using security credentials provided to him by his employer International Rectifier (INFINEON) (whose CEO Dr. Reinhard Ploss is a personal friend of German Chancellor Merkel) in a combined CIA-BND assassination attempt on the life of President Trump.